Maybe it was the 'Carine' effect that spawned this latest trend. Former editor of French Vogue, Carine Roitfeld would always arrive for duty at the international fashion shows, immaculately dressed in sharp heels ,with a very laissez-faire French attitude to beauty, i.e.  rocking just a smoky eye and easily dressed hair. And most groundbreaking of all 'sans sac'. Whilst other doyennes of the fashion world were schelpping the shows with outsize totes and must have giant designer holdalls, Carine confidently carried 'rien'. No bag - all Carine held was a gilt edged  invitation to a  front row seat ( ironically, not that she would even need to produce such documentation as her presence alone would suffice for entry to any show she desired to view)
Whilst at the show, I would wager Mrs Roitfeld most probably left a few things in the car with her driver, or had a team of assistants, interns and the like to do the carrying of any important items required (pen and paper for making notes? not Carine)
Whatever the reason, I am sure it has influenced the death knell of the 'It' bag. Thank gawd!!

It was becoming a joke, quite frankly, scrawny celebs carrying bags that weighed double their body weight just to make them look even more fragile and tinier. The size of Birkin's toted around town as handbags were larger than most budget airlines would even let you check in for a two week's holiday. It then spread out to the celebrity obsessed suburbs, and well of course, that also killed it. Fake or real Lariats or Bayswaters - the end was nigh for the 'It' bag.
﻿﻿

So ladies, lay the big 'It' bag to rest in its A2 sized dust bag somewhere safe until fashion deems once again big is beautiful. In the meantime, be inspired by fashion's international influencers and edit your items down to just a few essentials into what is just basically a purse on a strap or an oversized wallet.

Happy Birthday to The Style Eye, who is celebrating it's third year of all things fashionable, beautiful and stylish today!
To mark the occasion here is a reminder of your three most popular Style Eye posts of all time. ﻿

﻿
Although posted way back in April 2010, your favourite post ever is  'International Round-Ups, Tartan & Plaid' and it still feels current, seeing as traditional scottish fabrics are a key statement once again this season. 'Halston, Gucci, Fiorucci' is your second favourite post, The Style Eye's comment on seasonal directions taken from the archives of February 2011. And finally your third favourite post is 'The Grand Vintage Ball and Vintage Attire Pageant' I guess because vintage never goes out of style, just like The Style Eye!

﻿﻿ ﻿﻿ ﻿﻿Next season we are presented with specific silhouettes and shapes for fashion, yet it is usually the details such as prints, accessories and styling that identifies the 'looks' from one season to another. Although we have seen bold and oversized statement jewels such as necklaces filter into the mainstream fashion recently, next season it is pearls that get blown up and enlarged. See how Chanel has exaggerated the their pearl bracelets and necklaces to balance the proportions of their voluminous silhouettes. In fact, Chanel has oversized sandals too, sparking a trend for clumpy-clompy shoes. Next summer shoe styles are lacking in any sort of discretion, wear any of the footwear as seen at Bottega Veneta, Balenciaga, Prada and Louis Vuitton and you will let them know you are coming from streets away. If the shoes alone arent enough of a style statement then just add a large hat. At Chanel see how Karl Lagerfeld fuses a traditional spanish Cordobes riding hat with an huge 'compact disc' like brim. Saint-Laurent also chose to go large on the headwear with seventies style floppy hats. ﻿﻿﻿ ﻿﻿﻿﻿﻿﻿﻿﻿ ﻿ 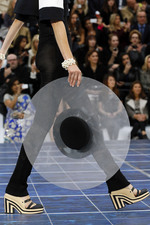 ﻿﻿ ﻿﻿
﻿﻿﻿﻿﻿﻿﻿﻿﻿﻿Usually reserved for bridal wear and fancy holy communuion dresses, white and off -white satins fabrics were featured in high fashion collections for next spring summer 2013. At both Celine and Alessandra Rich, long, loose and flowing pants were present in both collections also including silk satin wrap tops at Celine and a waistcoat/corset hybrid at Alessandra Rich. The Style Eye recmmends that with the delicate and pale nature of this fabric, that silk satin items be worn for at special evening occasions only, just avoid the red wine! 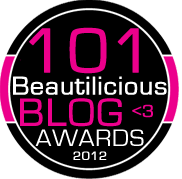